All you need is love

Steve Knarr knew when he decided he wanted to be a dad he was agreeing to take on all the responsibilities of being a parent. But this wasn’t what he had in mind.

“When Leandra was born the pediatrician showed her to us, said ‘here’s your daughter,’ then left with her.”

Hours after she was born, Leandra was flown to London for surgery on her esophagus and trachea and was given a 50/50 chance of surviving. She survived, but over the next several months there was a steady stream of additional set-backs.

Leandra contracted a respiratory syncytial virus, went into septic shock and experienced focal seizures (a seizure of the brain). Shortly after her first birthday she had a heart surgery.

“The first two years were a roller coaster.”

It wasn’t until years later it was determined Leandra had CHARGE Syndrome. CHARGE syndrome is a condition where a number of symptoms are seen together. The name comes from the initials of the main symptoms, all of which Leandra has:

Coloboma of the Eye –visual impairment

Atresia of the choanae –blockages of nasal passages, resulting in difficulty in breathing.

Retardation of growth and development – Leandra was diagnosed with scoliosis.

Leandra’s condition resulted in multiple aspiration pneumonias, pneumothoraxes and lung collapses, and resulted in severe damage to her lungs.

“Her left lung is beat-up; it’s like scar tissue. She can’t be left alone, even in the hospital. If she coughs, she has to be suctioned within seconds, or she’s at risk of contracting an aspiration pneumonia.” 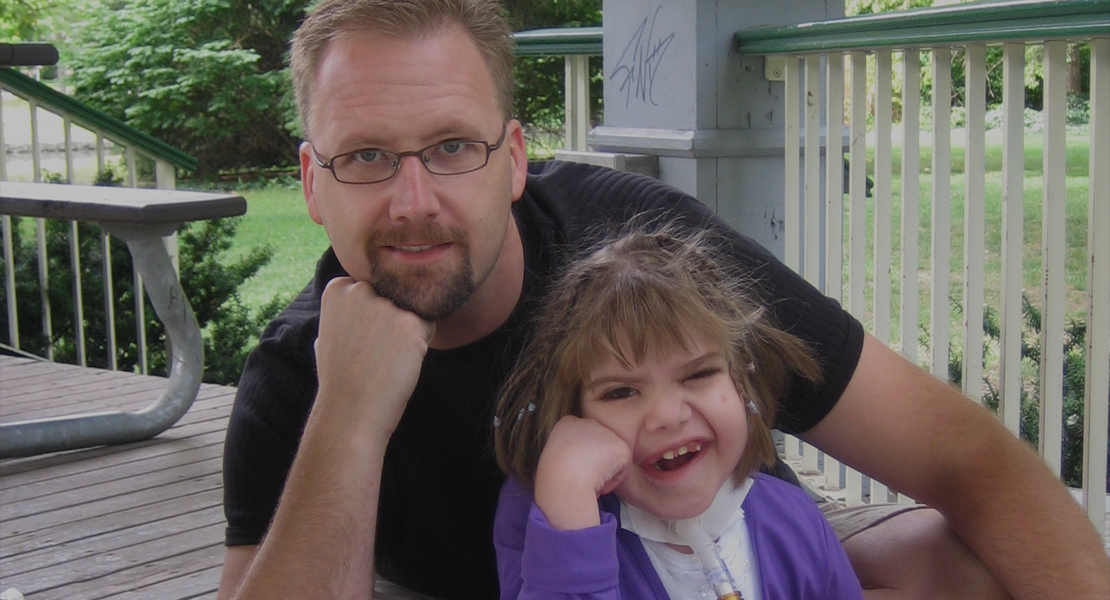 Most of Leandra’s first several years were spent in the hospital. Before her first birthday there had only been 12 day trips home. When Leandra was able to go home, she was considered the highest level of care ever released from the London Health Science Centre.

“The first trip home was for four hours and it was scary as all hell.”

Following her heart surgery after her first birthday, Leandra was able to go home more. But for the next two years she had multiple aspiration pneumonias and other complications and was constantly flown to London for months long hospital stays.

“We quit counting the number of days we spent at Ronald McDonald House in London at 500. We had the longest record. I hope we still have it - I don’t want someone else to go through it.”

To help stabilize her, Leandra had a tracheostomy when she was three and is now dependent on oxygen and ventilation equipment.

In order to take Leandra home, Steve had to learn how to care for her and perform a trach change. It took six weeks of training; for two of those weeks he literally moved into Leandra’s hospital room and provided all her care.

“Leandra likes to make everything a baptism by fire,” laughs Steve. “The first time I had to perform the change I was extremely nervous. I looked down at her, she looked up at me. She smiled. Then she rips off the cuff, deflating the trach. Now it’s an emergency trach change. But I managed to fix it.”

Leandra is now 19. Due to scoliosis, she requires a wheel chair for mobility and she continues to require 24/7 supervision due to her respiratory issues. Her ability to communicate is limited – she’s able to pick up on some context and use some gestures and signs to communicate. While she’s had multiple aspiration pneumonias and other complications resulting in hospital stays, with the help of ProResp she is able to live at home.

“She is happier at home. She has friends, we can do outings (she’s going to camp this summer) she can go to school.”

The journey home was a long and trying one for Steve, and made him reconsider what’s really important in life.

“Before Leandra I was a bit of a suck. I didn’t have a proper view of life.”

Steve admits hitting a wall after the first year and recalled a heart-to-heart moment he had with a friend.

“He told me the only option I have is to suck it up and deal with it. He said ‘no matter what happens, always show confidence on your face; she gets confidence from you.’”

Reflecting on all that has happened, Steve believes Leandra’s was the source of his strength.

Children with CHARGE syndrome are known to be excessively happy, and Leandra was no exception.

“She’s the happiest kid you’ll ever meet. She’s fun loving, caring and never angry at anyone.”

Steve firmly believes his quality of life has improved with Leandra. He is more compassionate towards other people, and the small things that used to bother him, don’t bother him anymore.

“My life is a heck of a lot more challenging, but it’s a heck of a lot better. I wouldn’t trade it for anything. Anything I can do to make her happy, I get paid back ten-fold with the smiles.”